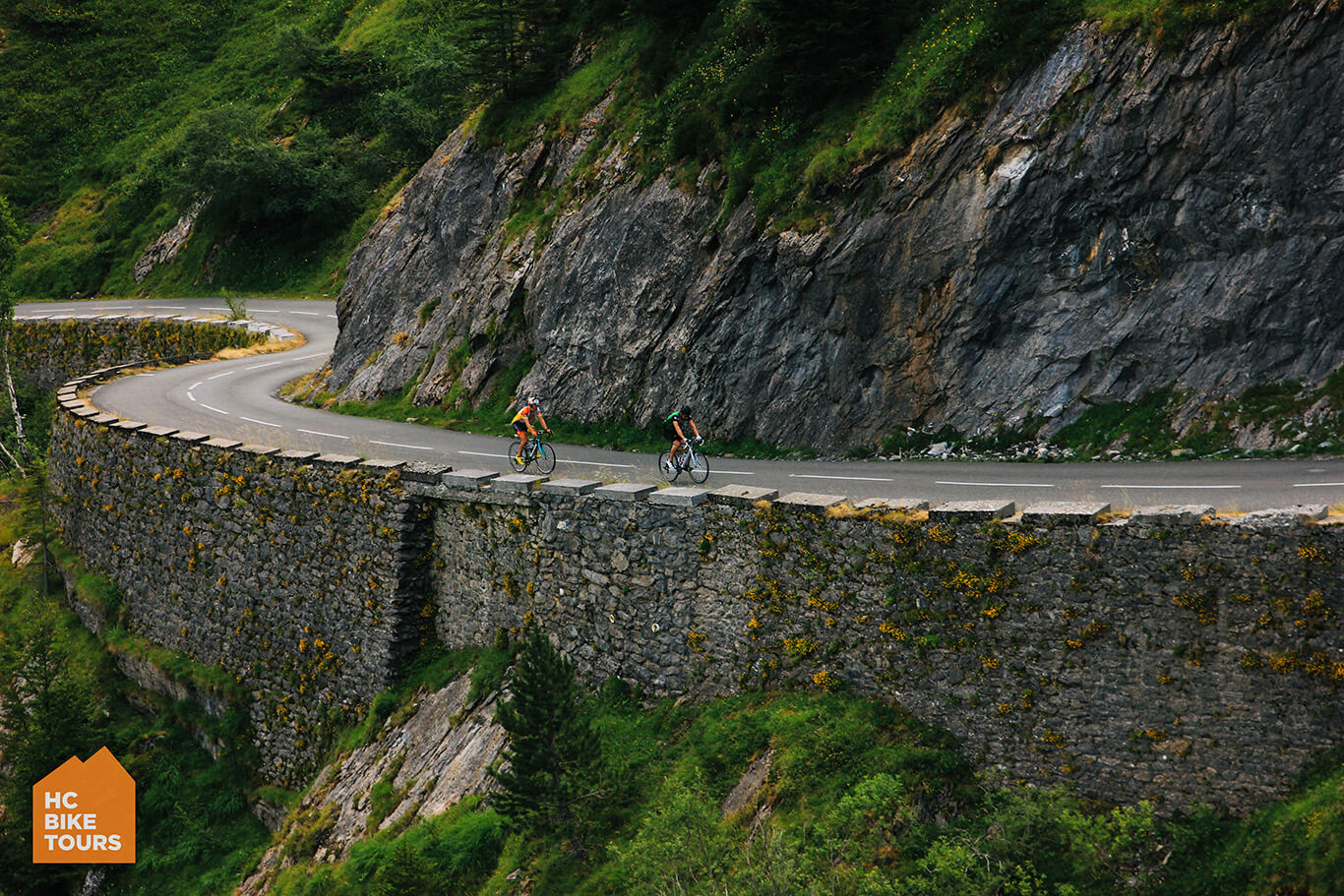 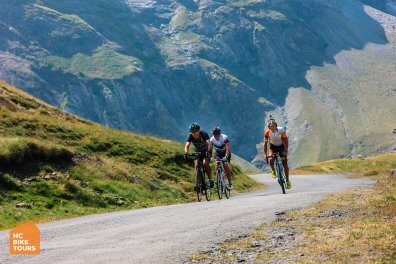 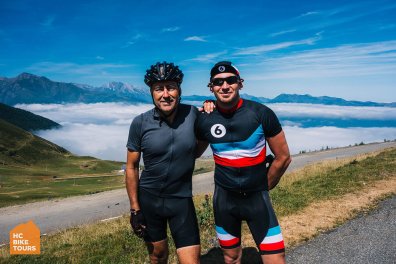 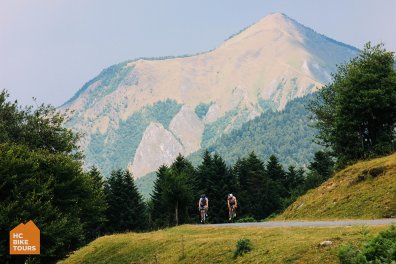 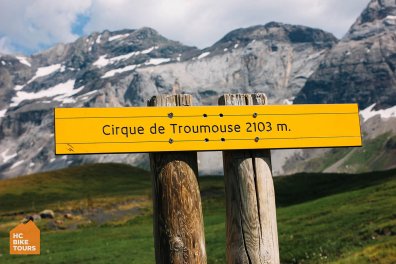 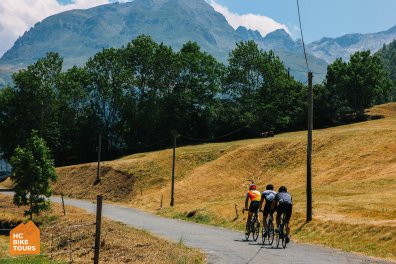 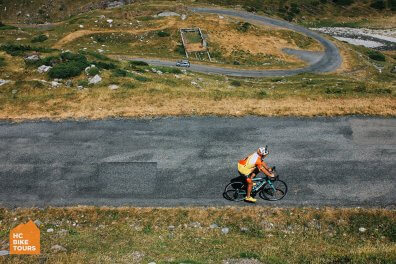 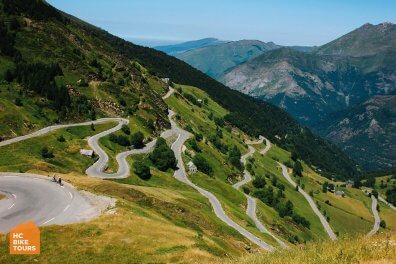 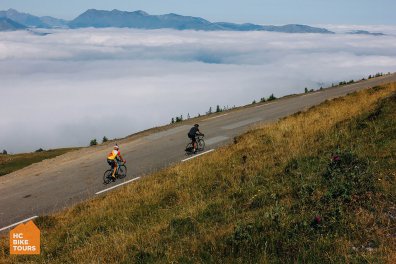 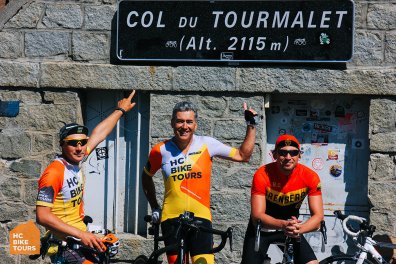 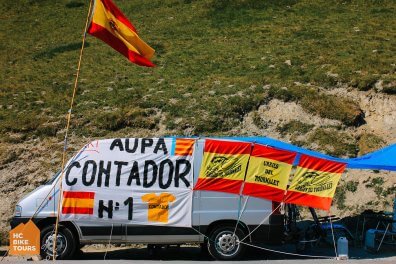 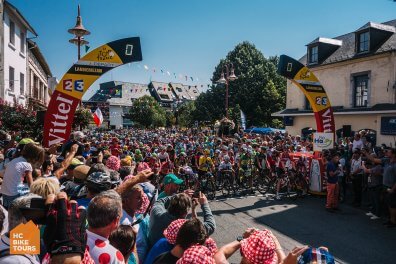 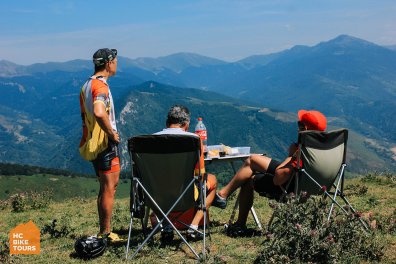 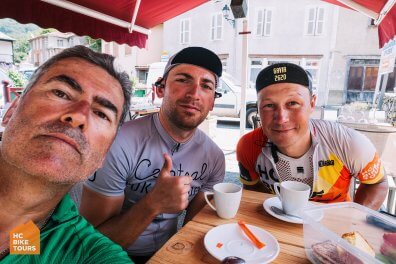 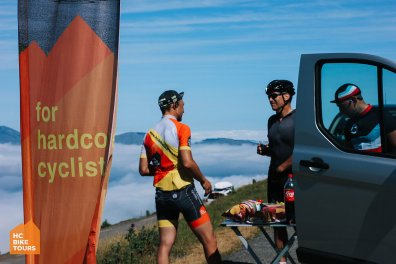 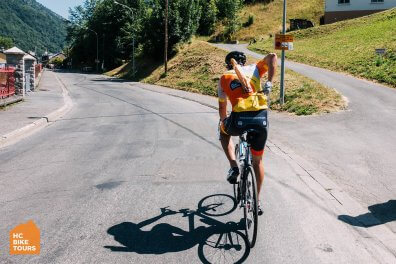 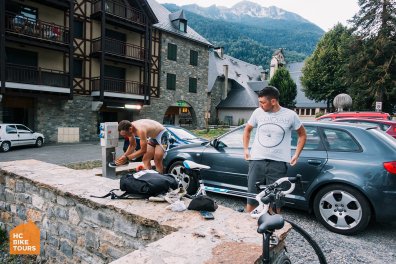 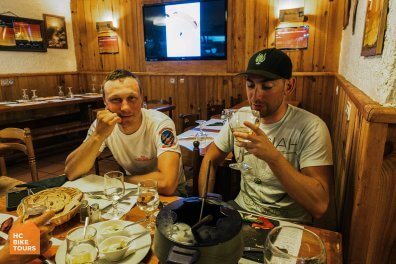 This one-week custom tour was planned and completed by Colin and Frederick, a father-son team. It was their first adventure with HC Bike Tours!  They were seeking support for exploring the best that the Pyrenees has to offer (and it offers a lot, from world renown Tour de France climbs, to fantastic food and accommodations, to the many historic sites and towns along the way) and the opportunity to watch parts of two Tour de France stages.  Enthusiastic cyclists, Colin and Frederick sought a worthy challenge and, with HC Bike Tours’ support, they definitely found it in Andalusia!

Frederick and Colin’s private tour encompassed the second week of the 2015 Tour de France, which set them up to view Cautarets, the final climb of the 11th stage as well as the start of the 12th stage the following morning. With strategic planning, HC Bike tours was able to build a great itinerary that included the most famous climbs but allowed them to make one centrally located hotel their ‘home base’ for the entire trip. The focus of the tour was primarily on climbing. The ‘wish list’ included the greats like Col du Tourmalet (both sides), Col d’Aspin, Hautacam, Col du Peyresourdes, Col du Solour and Col d’Aubisque – all of the most legendary Tour de France climbs in the Pyrenees! In addition, HC Tours principal Aigars Paegle included some of his favorite ‘lesser-known’ climbs. In all, 6 days of riding, averaging 10,000 ft climbing (and descending!) per day, with two spectacular two days of 16,000 ft and 15,000 ft – a big week of riding.

“To any/all folks poking around the internet, trying to track down a reputable, small-group cycling tour with great challenges and greater guides, I could not recommend HC Bike Tours enough. My father and I just wrapped up a week-long battle through some fantastic Pyrenees climbing and walked away feeling like the experience was essentially unmatched. The rides are very well guided, flexible for varying levels of experience and fantastically well-supported. Despite near-100F temperatures all week, the HC Tours van kept us very well fed and hydrated throughout all of our rides, allowing us to focus on completing some historical climbs and enjoying the atmosphere surrounding Le Tour. Honestly, could not say enough things about the company. Thanks for a great week, guys.”

To kick off the tour, all parties converged on the Midi-Pyrenees. The HC team gave Frederick and Colin a warm welcome when they arrived (in a rental car from Barcelona) at the cozy hotel in Luz-Sant-Sauveur. A charming village in the Midi-Pyrenees, surrounded by high mountains, the town would be their event HQ for the next 7 days.

After settling in, and enjoying a light lunch, the crew helped with bike set-up and the group took off for a warm-up ride to a secret pearl of the Pyrenees - Cirque de Troumouse. A fabulous road leads to a dead end and would definitely qualify as a Hors categorie climb if the Tour ever goes there. Its beauty is indescribable; you simply must see it for yourself. The day ended with a special meal at the hotel’s restaurant. Just imagine: puff pastry with foie gras and apples, garbure soup, mutton chops, duck fillet with honey, scallops with leek fondue…what could better fuel a week of epic riding to come?!

Day 2 included two spectacular and famous climbs up to ski stations: Hautacam and Luz Ardiden. Both are hard, twisty and irregular climbs with fantastic views and a long pedigree of Tour appearances. Aigars, Frederick and Colin started straight after breakfast and ended the ride late in the afternoon, with a little time (and energy!) for a ‘recovery’ walk around the village Luz Saint Sauveur, before dinner featuring gazpacho and fresh fish.

Day 3 is when the real hard core cycling got started! Col du Tourmalet starts right in the village. It has been included in the Tour de France more than any other pass, starting in 1910. It is truly a legendary climb! After crossing this Hors category pass, there was a brief reprieve for a long and steep downhill, quickly followed by Col Hourquette d’Anzinzan and Col d’Aspin, which also has been part of The Tour since 1910. After Col d’Aspin, the tenacious riders headed to climb Col du Tourmalet from its other side. With a quick stop for photos of huge smiles of achievement and relief at the top of Tourmalet, the rest of the road was just fast downhill back to the village and hotel. The day ended with a well-deserved restaurant meal of local specialities. Perfect fuel for the next day’s challenges!

After a few big days on the bike, Day 4 offered Colin and Frederick a change of pace. The day started with an almost flat ride to the village of Argeles-Gazost, a well-known spa town and ski resort, where the Cautarets climb begins. At the top of the climb, Colin and Frederick switched gears and became spectators under the shade of HC Bike Tours’ marquee tent, enjoying a catered BBQ lunch and cold beverages with LIVE satellite TV race coverage while awaiting the arrival of the peloton. Little did Colin and Frederick know that HC Bike Tours staff set up the tent and supplies at the viewing area 24 hours in advance, only to find their satellite and TV stolen on their arrival on ‘race day’! Undaunted, Aigars got back in to town, managed to procure replacements and rode the gear (strapped to his back) up the 10km Cautarets climb on his bike, as the road was already closed to traffic. That’s going the extra mile – and then some!

Along with thousands of other cycling fans, Frederick, Colin and the HC Tours crew enjoyed the drama of a real battle between the main contenders at the front of the peloton climbing Cautarets after already having suffered through the two legends Col d’Aspin and Tourmalet! Inspired for the next day’s climbing, they enjoyed a relatively easy ride back to the hotel for dinner on their own, and more recovery.

For Day 5, the crew first took a one hour drive in the HC van to the village of Lannemezan to watch the start of the 12th stage of the tour. After watching the peloton take off, the HC Tours van took them to the day’s start point for their own big day on the bike. Three climbs: Port de Bales, Col de Peyresourde, Col de Val Louron Azet made for a day not for the faint of heart. It was already a long day, when on the last climb, the riders watched as huge thunderheads loomed on the horizon, growing with every passing moment. Miraculously the thunderstorm skated past them without contact. They finished the long day in the saddle around 8pm in a small village. Due to the late hour, Aigars made a quick change of plans and was able to find a hotel with facilities for a quick and refreshing wash-up and a good restaurant for an immediate (and much appreciated) re-fueling dinner before the van ride back to the HQ hotel. Then it was off to sleep in preparation for the ‘grand finale’!

Saving the best for last, Aigars planned one of the most beautiful roads in the Pyrenees for Day 6. Another route frequently featured in the Tour, the mountain pass Col du Soulor in conjunction with Col d’Aubisque starts in the village of Argeles-Gazost. This ride, Aigars’ absolute personal favorite, features fantastic climbing surrounded by beautiful landscape sceneries of dairy farms with herds of sheep and cows grazing in meadows and the ever-present distant chiming of their bells. While the weather started out great, rain again threatened in the afternoon but this time the riders weren’t so lucky. A quick re-routing shortened the time riding in the pouring rain, and all riders were glad to get in the HC van for the cold and wet final descent. Back at the hotel, the final dinner was all celebration, toasts and story-telling of achievements and adventures in an amazing week in the Pyrenees!

On day 7, though it was so hard to leave it all behind, the riders packed up after one last rich buffet breakfast. Then it was time for saying goodbyes and looking forward to the next adventure!

♦ Challenge yourself in the French Pyrenees during the second week of Tour de France 2015. Ride the last climb of Tour de France Stage 11 just a few hours before the peloton and watch the race LIVE in HC Bike Tours’ race-viewing area with a large tent, LIVE TV and have a picnic lunch and cold drinks at the top of Cautarets

Remember, it`s your Private Cycling Tour! You can shorten the rides any time or even ride more!