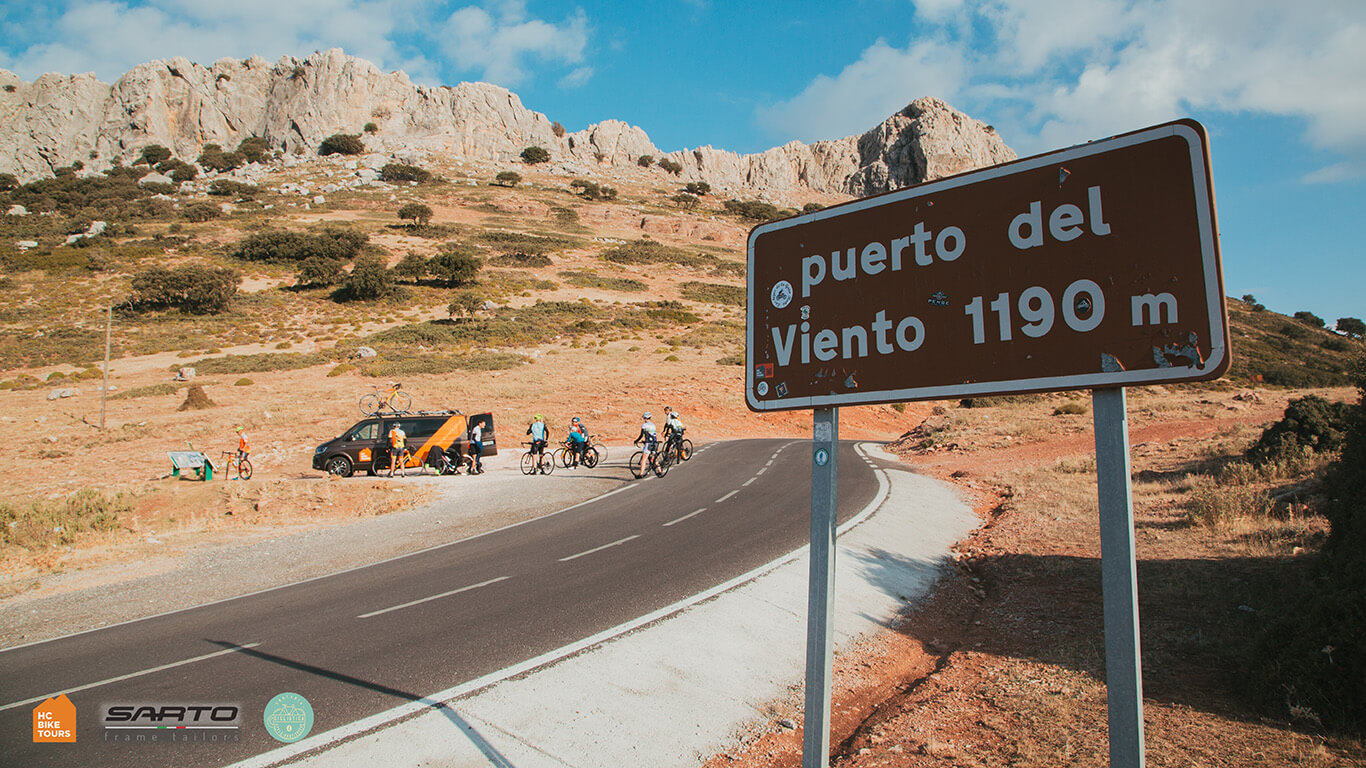 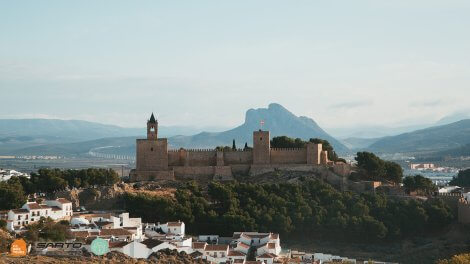 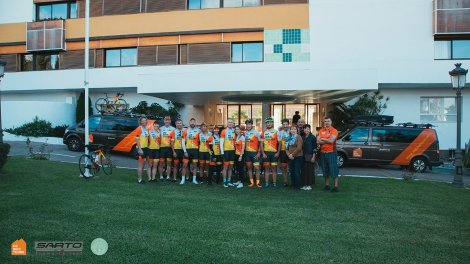 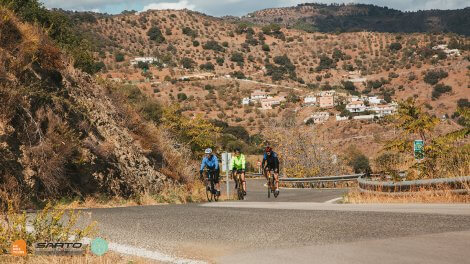 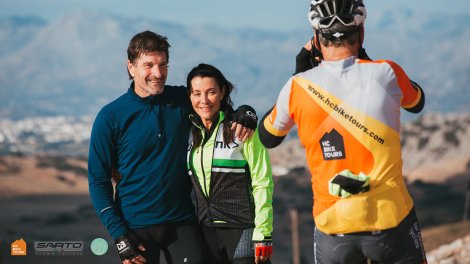 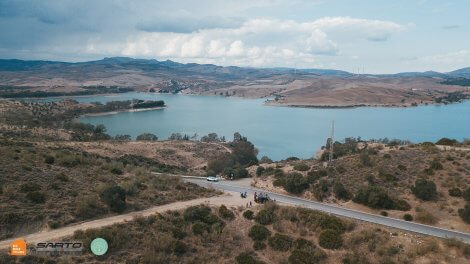 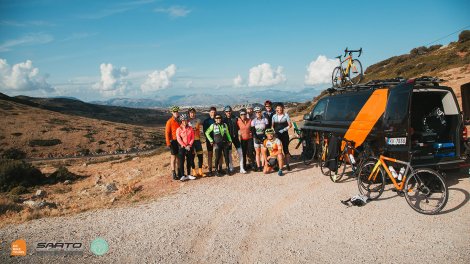 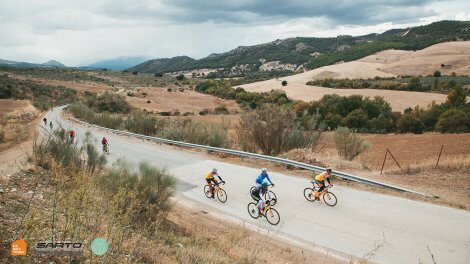 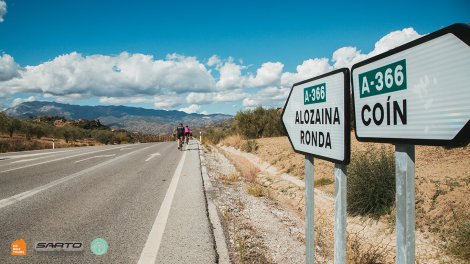 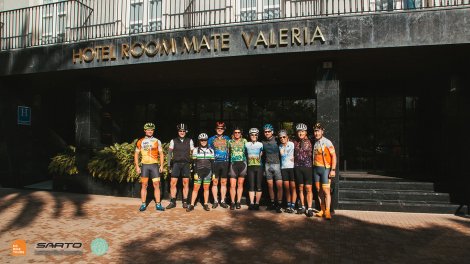 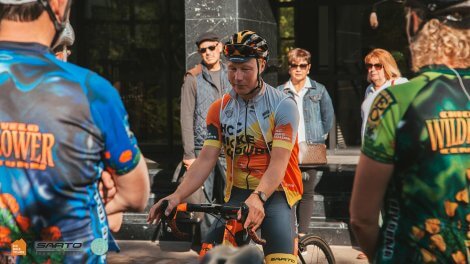 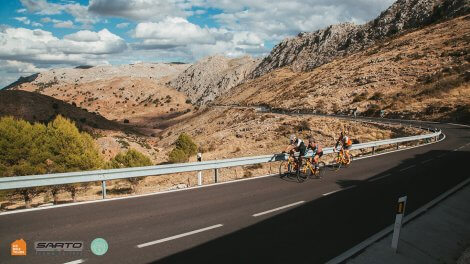 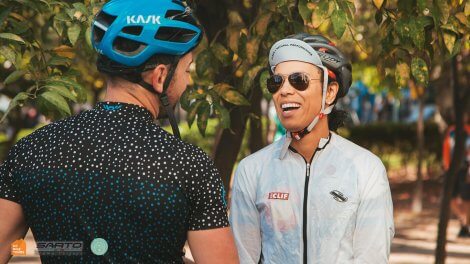 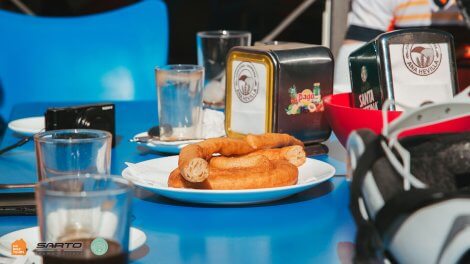 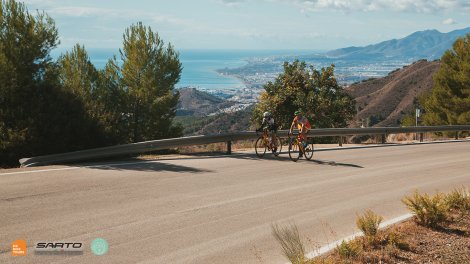 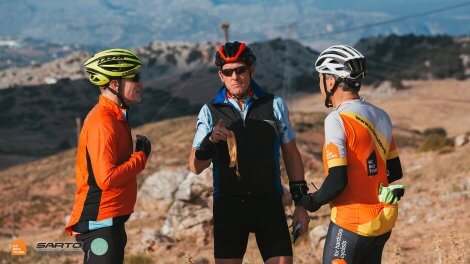 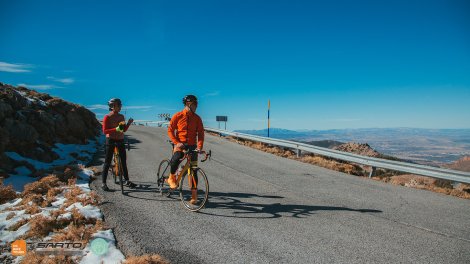 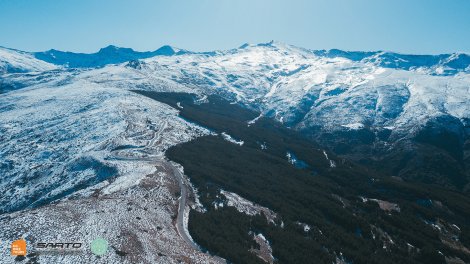 In 2019, the father and son team of Frederick and Colin Ruegsegger returned to Europe for their third tour with HC Bike Tours – this time for an exploratory loop route around Andalusia, Spain. Bringing with them several couples and singles (including 3 non-cyclists) friends of Frederick, the group of mostly age 50 to 60 was this time was seeking a little less of a bicycling challenge and a little more of a tourist experience (but with plenty of bike challenge options for those who wanted it!). They asked HC Tours founder Aigars Paegle for the best route to see the most ‘great stuff’ and enjoy fabulous food and luxurious accommodations. Eventually they settled on a 7-day whirlwind ‘exploration’ tour of Andalusia in southern Spain featuring an exploration of Andalusia, Ronda and a very special visit to the Alhambra palace and fortress complex in Granada (the popular tours require booking several months in advance – all details arranged by HC Bike Tours of course!). The tour started and finished with pick-up and drop-off at the Malaga Airport.

On Day 1, HC Bike Tours vans made multiple trips to the airport to collect and welcome all 13 members of the group arriving from various locations, and shuttled them to the boutique hotel Room Mate Hotel Valeria in Malaga. After settling in at the hotel and a quick bike-fit for everyone who rented, and unpacking for the couple who brought their own bikes, the group departed for an easy warm-up ride around scenic Malaga. Post-ride, the group met up to enjoy their first sampling of delicious Andalusian cuisine featuring chirungitos (grilled fresh fish, often available right at the beach!), gazpacho, tapas and paella. Perfect fuel for cycling! Although some stormy weather was descending on Spain, the group hoped for the best but kept a close eye on the forecast.

After a restful night and hearty breakfast at the hotel, the group woke to beautiful weather despite predicted storms. They gathered for their first big ride on Day 2, establishing the pattern for most days on the tour: Breakfast, shuttle for non-riders to destination hotel, and riders departing directly from hotel to the new hotel, with various scenic and café stops along the way. Day 2’s destination was the historic town of Ronda, one of the prettiest and most famous White Villages of Andalusia. These villages, populated since pre-historic times, feature limestone white-washed structures, charming town squares and many museums and local caves with ancient rock paintings made by original Roman, Visigoth, Arab and Iberian settlers. The route to Ronda offered a 100 km ride with 2,000 meters of climbing and all the riders stayed mostly together for the entire route featuring one challenging but beautiful longer climb through a beautiful gorge. The luxurious accommodations in Ronda, at the 4-Star Hotel Catalonia Reina Victoria, helped to ease the group into the daily cycling routine.

Day 3 began with optimism as the stormy weather seemed to be staying further to the north (Andalusia being located at the extreme south of Spain). The route, from Ronda to Antequera, featured 94 km and elevation gain of 1,975 m, making it a solid day in the mountains of Andalusia. At the largest climb, the leaders realized that one of the women must have made a wrong turn, and sent a van back to look for her as there was no cell coverage whatsoever. They tracked her down, unintentionally on the alternate route, but enthusiastically approaching the summit! She kept on going and won the ‘overachiever’ award at dinner that night. All the group was pampered at the 4-Star hotel Finca Esclava in Antequera and had a great time socializing and comparing stories of adventures at dinner.

Day 4 > Riding from Antequera to Nerja with coffee in Comares

On Day 4 everyone was amazed at their good fortune in continuing to dodge the bad weather which seemed to be surrounding the group on all sides. After stoking up at the breakfast buffet, the group headed from Antequera to Nerja – a beautiful town by the sea. The 100 km route with 1,572 m of climbing also offered an optional mountain detour to visit Comares, a fabulous village perched on top of a hill, with the added attraction of one of the best coffee stops in all Europe, featuring home-made cakes! Those who chose to add this option enjoyed spectacular views as they enjoyed the café’s heavenly home-made cakes and other baked goods! Accommodations at the 4-Star Hotel Parador de Nerja in the beautiful seaside village of Nerja definitely met the group’s expectations.

Day 5 brought the adventure-seekers from Nerja through Otivar Natural Park to Granada, an amazing day on the bike that featured both rugged coastal beauty and one of founder Aigars’ most favorite climbs through the breathtaking heart of Otivar Natural Park. Taking the riders from sea level at Nerja to 800 meters in Granada, the 98 km, 2,300 m route featured plenty of challenge, and though the group avoided the rain for the most part, temperatures at the higher elevations were brisk, challenging the HC Bike Tour support crew to ensure that all riders had access to their jackets and other extra gear as well as on-bike fuel in addition to the key café stops! The challenge was deemed ‘well worth the effort’ by the riders as they met up with the non-riders at the 19th-century palace Hospes Palacio de los Patos, a lovely hotel right in the historic center of Granada, where the weather thankfully remained brisk but clear. The group enjoyed a hearty, well-earned Spanish meal and then made an early night in preparation for a big last day of their tour.

For Day 6, HC Bike Tours planned a ‘grand finale’! The final day of riding included both a challenging ride AND the pre-booked walking tour of the Alhambra Palace. The ride featured a 78 km, 2,297 m ‘out and back’ route up the spectacular and infamous Sierra Nevada in Spain. The highest paved road in Europe, it climbs to the Sierra Nevada ski resort at 3,398 m above sea level! Unfortunately, at about 2,500 meters elevation, the weather wasn`t warm enough to keep going as the first snow of the year landed in Sierra Nevada about a day ago. Also knowing it was critical to get to the Alhambra tour on time, the group was forced to turn back early, but still enjoyed spectacular views and bragging rights for ‘all season riding’! They returned to the same great hotel in Granada, showered up and headed out for food and a tour of the incredible Alhambra palace and fortress. A UNESCO Heritage Site, it is now one of Spain’s major tourist attractions, exhibiting the country’s most significant and well-known Islamic architecture. After the tour, the group gathered for a final meal replete with stories, thank-yous and brainstorming for their next HC Tours Adventure.

Day 7 passed quickly in a flurry of breakfast, packing, farewells and a trip to the airport to send our adventurers off on their way.

♦ Scenic riding along the sea, through several mountain national parks of Andalusia and up to Sierra Nevada – the highest paved road in Europe (3,398m above the sea level!!! – will see how high we will get there as there is an option to turn back at any point). Visited historic and gorgeous towns and “white villages”: Malaga, Nerja, Ronda, Comares, Granada, as well the famous castle of Spain – Alhambra. And, sure, we tried out traditional Spanish meals like paella and different tapas

♦ All the group needed to do is to arrive at the Malaga airport and they were off – HC Bike Tours team took care about the rest: complete Custom cycling itinerary, planning the best routes, booked hotels and restaurants, and made all the rest of arrangements for them.

It’s your Private Custom cycling tour. Feel free to build a tour that suits your group the best here.