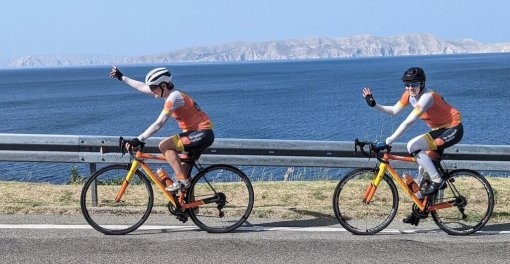 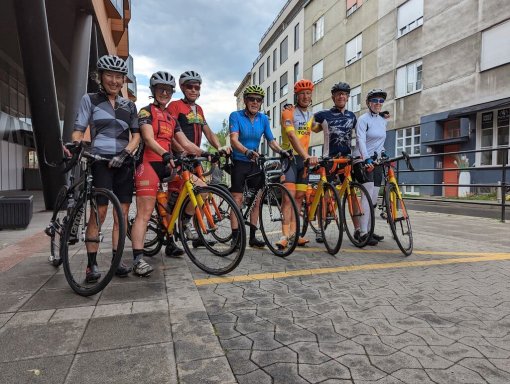 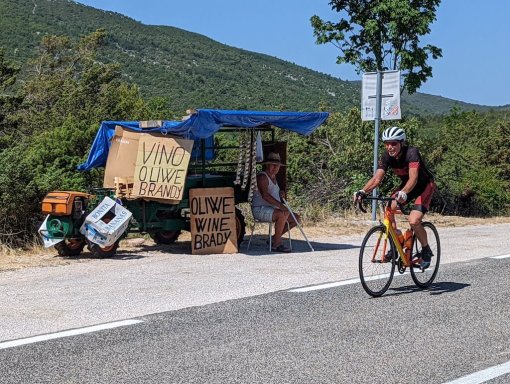 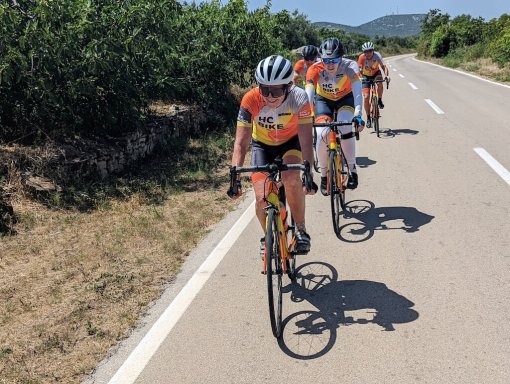 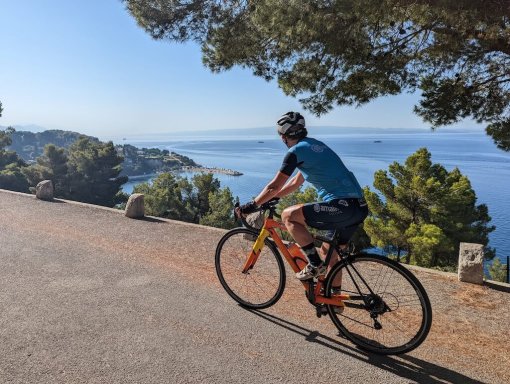 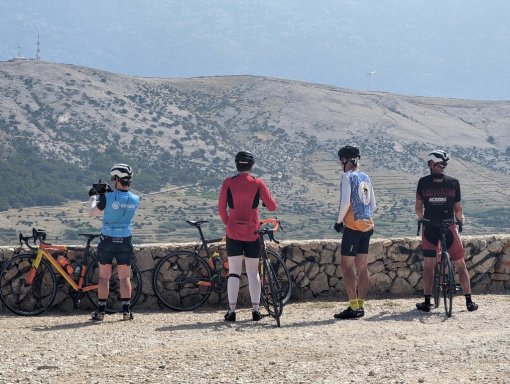 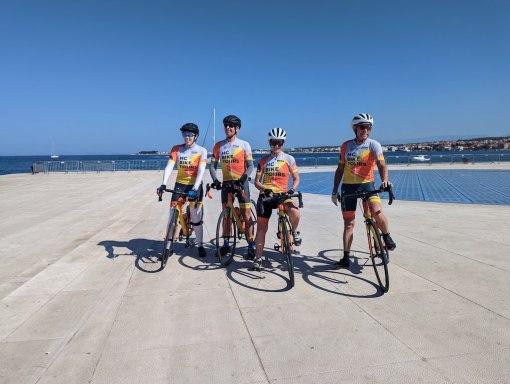 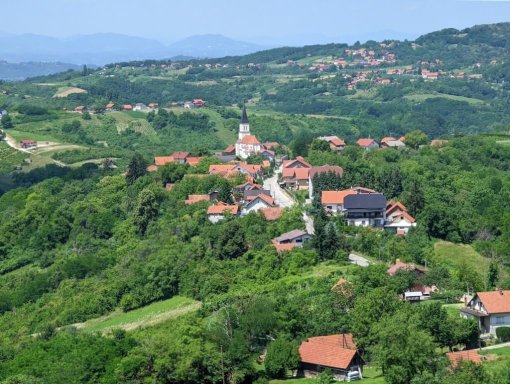 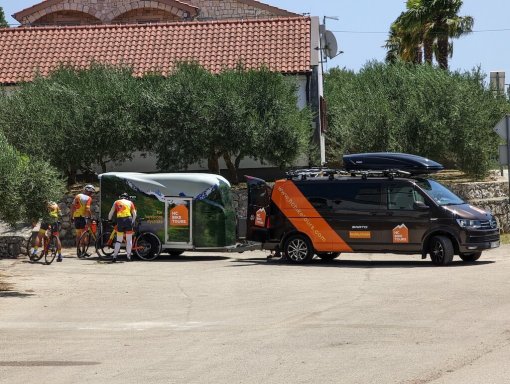 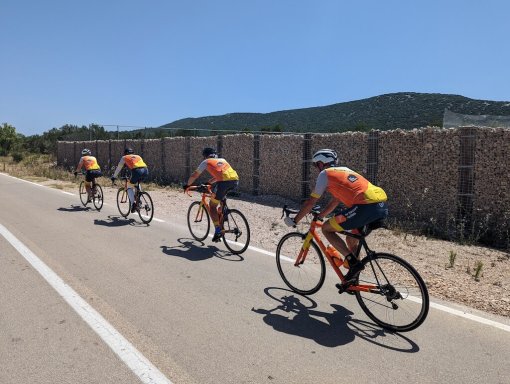 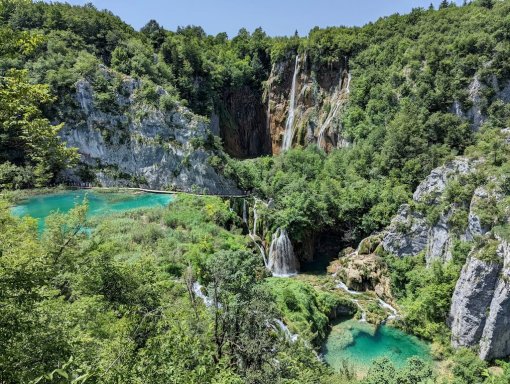 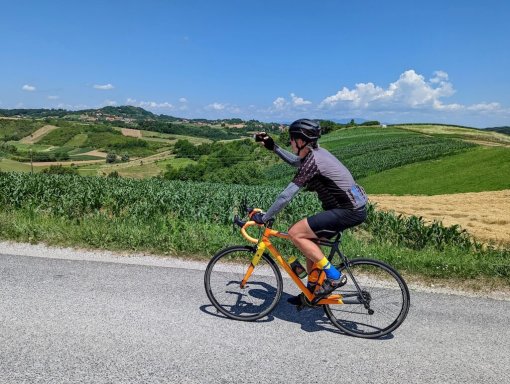 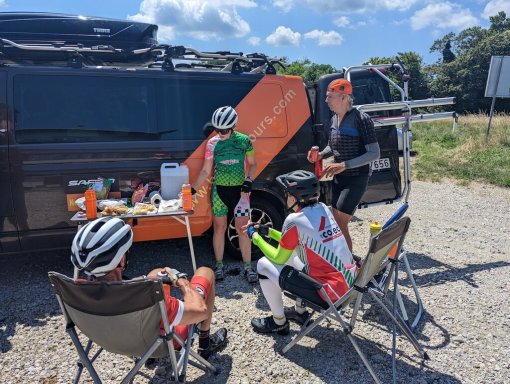 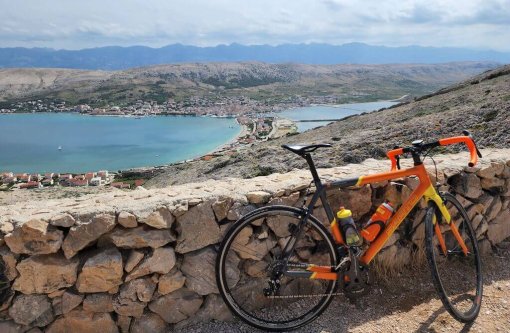 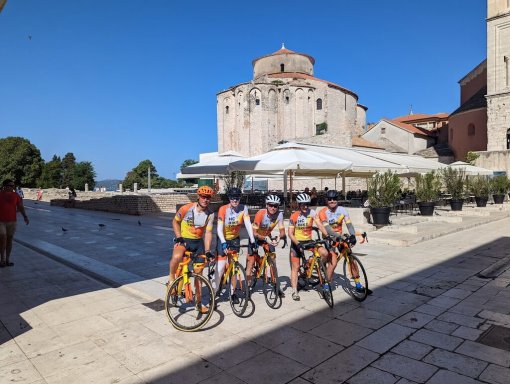 After enduring the COVID lockdown, Janine Rood and friends (all from California, USA) were ready to explore some new places. So they decided to do two consecutive HC Bike Tours in 2022, starting with an 8-day private cycling tour to Croatia. None of them had been to Croatia before but they told HC Bike Tours owner Aigars Paegle that they were looking for a trip to explore what Croatia had to offer, and to help prepare them for a more challenging second tour (see Salzburg to Ljubljana). Aigars designed a great route that took them from the lush pastoral countryside of Zagreb to the arid beauty of Croatia’s Adriatic island-dotted coastline, They even squeezed in some day hiking at Croatia’s world-famous Plitvice National Park (a UNESCO World Heritage Site) along the way.

With COVID concerns still looming, it was to be a small group of 6 riders plus Aigars and one additional staffer providing support. All the participants arrived without incident at Zagreb’s Franjo Tudman airport and were transported by HC Bike Tours to their downtown Zagreb hotel, just steps away from the city’s charming old town.

The capital of Croatia, Zagreb is a modern city of nearly a million people, with many opportunities for recreation, dining and exploration. The entire group arrived a day early to acclimate, and after a morning of bike fitting and assembly, went on a short afternoon ride up the ‘front’ side of Sljeme, Zagreb’s own little mountain. About halfway up, the climb, they encountered a surprisingly warm but intense rainstorm which kept them company all the way back down to the edge of Zagreb, where it seemingly never rained at all! Even on this first ride, everyone in the group noticed that Croatian drivers were a bit more aggressive than in other European countries they had visited.

For the first official day of the tour, the group took backroads through lush rolling countryside (including a few really steep rollers!) past farms and small towns, and out to the back side of Sljeme Mountain. After a much-appreciated ‘lunch stop’, the riders returned to Zagreb via a solid climb up the back side of Sljeme to enjoy a scenic rest stop under the ski park gondolas at the summit. Then it was down the front side on the same road as the day before, but today sunny and hot where it had been almost a river the day before! For dinner, the group walked down to a traditional Zagreb downtown restaurant where they enjoyed a hearty meal of Croatian favorites (lots of beef!). Well-fueled, they hiked back up to their hotel for a good night’s sleep!
Day 1 route: Zagreb > Sljeme mountain > Zagreb

Day 2 began with a short ‘transfer’ ride in the HC Bike Tours van, to Plitvice National Park, where the group explored the MANY waterfalls and lakes that have made the park world-famous. The group opted to take the quick boat ride from the parking lot to the “upper” area of the park which is said to be less crowded. They opted for a 4-mile hike, ending with a tram ride back to the HC Bike Tours van. It was a pretty hot day, and the air conditioning felt very good, so they opted to enjoy the drive for about half the distance to their destination, the coastal village of Senj. After some food and rest, they revived considerably and got dropped off to enjoy biking the last 30 or so miles on the backroads in the Velebit mountains, including the descent (possibly the trip’s most fun descent!) into town! Their accommodations were right on the marina with a nice boardwalk, and the group enjoyed an evening stroll after their al fresco dinner featuring incredibly fresh seafood!
Day 2 route: National Park Plitvice > Senj

Day 3 began with coastal cycling through picturesque Velebit villages, with the Adriatic Sea to the right and slopes of the Velebit mountain range to the left. Working south as the temperature quickly heated up, the group passed by the Islands Krk, Prvić, Goli Otok and Rab, before taking a ferry to the island of Pag. The eastern sides of all these islands appeared quite bleak from a distance. The ferry ride was quickly over, and up close, the eastern coast of Pag was starkly desolate, dry and hot. The area is shaped by the “Bura”, a harsh, cold winter wind that ensures only the most resilient plant species can survive. But on this hot day, it was a short sweaty climb and then a mild descent into the tourist/beach town of Novalja, where the group was treated to elegant spa hotel accommodations just outside of town. The group relaxed and recovered poolside during the afternoon heat of about 100 degrees. Dinner at a local restaurant was an enjoyable evening walk away.
Day 3 route: Senj > Sveti Juraj > Ferry to Pag island > Novalja

Day 4, another 100-degree day, took the group southeast almost the length of the entire island of Pag, and back to the mainland and the town of Zadar. This ride highlighted the huge differences between the eastern and western parts of the island Pag. Throughout the day, they crossed between the western part of the island which features more pleasant, greener rolling terrain, and the harsher and more rugged eastern Pag coastline, facing the mainland, with steep descents to the coastline decorated with numerous reefs. Once back on the mainland (crossing via a short bridge!), they entered into the region called Dalmatia, where they began to see more roadside market stands (watermelon!), and soon they arrived at their beachside hotel, where they were glad to cool off in the remarkably clear blue waters of the Adriatic.
Day 4 route: Novalja > Pag > Paški most > Zadar

The group took a highly enjoyable Day 5 “rest day” in Zadar, where they took maximum advantage of their excellent beach-side accommodations with multiple swims, a bit of sunbathing, and a picnic beachside dinner. Most of the group enjoyed excellent therapeutic massages provided by HC Bike Tours van driver Ugis, who is also an excellent sports massage therapist who works regularly with Olympic-caliber athletes. The group was revived and rested for a few more days of warm-weather riding!

Day 6 began with a fun bike tour of Zadar’s truly ancient (Roman ruins!) old town area, including a brief stop at Zadar’s reknown Sea Organ. Listening to the eerie music generated was an experience not to be missed. Soon they were back out on the open road, heading southeast to Vodice, partially along the beautiful Dalmatian coast, and partially on the quieter inland backroads. The local olive oil industry was evidenced by the many olive orchards and the group couldn’t help but marvel at the similarity to their own northern California roads! The only disappointment was that the figs on the wild fig trees were mostly not ripe! The route then took the riders around Vransko Lake, Croatia’s largest natural lake, and on to the picturesque village of Vodice – a well-known resort area. It was another scorching 100+ degree day, and the group all enjoyed a post-ride dip in the swimming pool!
Day 6 route: Zadar > Vransko Jezero > Vodice

The final ‘official’ day of riding in Croatia, Day 7 brought more hot sunny weather and rolling hills. The first part of the ride was to Sibenik – the oldest Croatian town (1066 A.D), full of narrow winding streets with stone houses and many stairs, and St. Jacob’s Cathedral, which is probably the most beautiful site of Sibenik. In spite of another day of 100 degree heat, the group opted again to take more interesting (climbing!) backroads rather than face the fast-moving tourist traffic on the coast for most of the rest of the ride. Eventually, they enjoyed the final descent into Split and zig-zagged through the city to their hotel just blocks from the beach, where all were happy to bring down their core temperature! The group enjoyed a truly special Croatian traditional meal of spit-roast lamb at a small restaurant just outside of the city. After having seen many of these restaurants along their route, with a full lamb or pig roasting in an outdoor barbeque pit, everyone thoroughly enjoyed this spectacular local tradition!
Day 7 route: Vodice > Sibenik > Brodarica > Grebastica > Primosten > Trogir > Split

On Day 8, the final day of tour, because everyone in the group was staying at the hotel for a couple of days, there was time for a brief optional “city tour” of Split on a bike, which everyone opted to do! Aigars took the group out for a cruise of the waterfront and a loop in the famous Marjan Park, climbing up Marjan Hill for one last spectacular view of the Adriatic. The goodbyes weren’t too sad because they were all heading to Salzburg for their next tour!
Day 8 route:

Plan your own Bespoke Croatia bike tour! Contact Us here